Last week Prince William of the UK arrived in Japan for a four day trip, and it is quite impressive what a prince can fit in his timetable during such a short time!

On the first day of his Japan tour Prince William went to the Nakajima Tea House, this was built 350 years ago during the Edo period, in the middle of a small lake within the Hama-Rikyu gardens in Tokyo. Prince William experienced a traditional Japanese tea ceremony performed by Dr Genshitsu Sen, who is 92 and the 15th generation of his family to hold a senior role in the spiritual art of tea making. Dr Genshitsu Sen also made tea for Prince William’s parents, Prince Charles and Princess Diana, when they visited Kyoto in 1986.

In the below video you can see Prince William arriving in Japan and enjoying the tea ceremony.

On the second day of his visit he did something which the vast majority of normal tourists can’t do, he met the Emperor of Japan! He met with Emperor Akihito and his wife Empress Michiko at the Gosho imperial residence, bowing from the neck to both of them. Addressing them in turn as “your majesty”, the Prince told the emperor, who he last met in 2012 during the Queen’s Diamond Jubilee Sovereign Monarchs’ lunch “Your majesty, it’s very nice to see you again. Thank you for having me here – fantastic.” In the below video you can see him paying his respect at a graveyard for Commonwealth soldiers and also meeting the Japanese Royal Family.

Prince William met Japanese astronaut Soichi Noguch, along with Andy Palmer, Aston Martin’s chief executive, at the Mori Tower in Roppongi, Tokyo, for the launch of the Innovation is Great campaign. All three wore red “Happi” gowns for a traditional sake barrel-breaking ritual to mark the start of this year long campaign to generate business, educational, and research and development partnerships between the UK and Japan. The Prince gave a speech within which he started and ended with Japanese words. He began with “Minna sama Konnichiwa” and ended his speech with “arigato gozaimasu.”

In his speech he stated that “In just 24 hours so far in Japan, I have had a chance to experience the blend of ancient and modern which so characterises this amazing country. I can barely think of another country on earth which pays so much reverence to its ancient customs whilst also being so outwardly modern. Of course, the United Kingdom, too, is known as a place where the ancient and modern co-exist very comfortably alongside one another.”

He also spoke about the 17th century sailor Will Adams, the first Englishman to live in Japan, who brought maritime knowledge from the west and learnt much from the Japanese.Following this he also said that “As two nations, we have been learning from each other ever since. At the end of the 19th century, Japan imported a great wave of technology and practice from the United Kingdom, from railways to whisky. In the second half of the 20th century, and into this, the exchange has been more two-way. Britain’s car, train and nuclear industries are reviving, and becoming world-beating, thanks to Japanese investment from Hitachi, Nissan and many others.Our experiences of running the London Olympics and Paralympics are being actively shared with those here preparing for the 2020 Tokyo Olympics and Paralympics.”

On the third day of his trip he was transformed into a 16th Century Japanese leader during a tour of a Tokyo television studio. He wore an embellished gold helmet and glittering regal red and gold tunic, and he was handed a replica samurai sword. He was on the set of Sunday night historical drama Taiga where he also enjoyed a dance by Geisha girls. 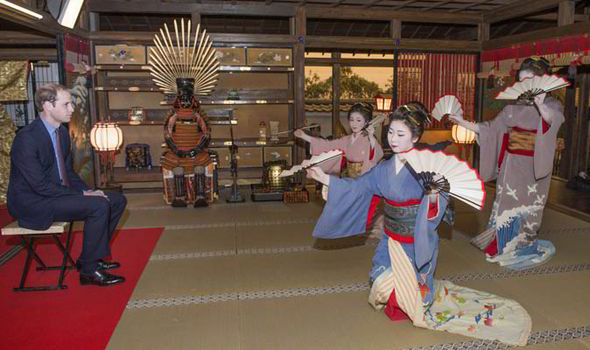 This popular show, which is in its 54th series, features famous characters from Japanese history but changes the period for the action every year with the current series called Hana Moyu or Ardent Flower. As he was greeted by a line of actors dressed as soldiers, the prince said: “Is it a show like EastEnders?” before being taken on to the set that depicted a chaya or tea house, used by samurai as a members’ club, complete with geisha.

In the hair and make-up department Tim Hitchens, Britain’s ambassador to Japan, put on a samurai wig. Prince William was asked if he wanted to wear a wig, but said: “If I put this on my brother would never let me forget it – I seriously can’t.”

When a prince visits Japan, it is a very different kind of trip to a normal tourist!