Many people will have heard of Kabuki (a traditional form of Japanese theatre), and perhaps they would have also heard of Noh. Noh (能), meaning talent, is a traditional Japanese musical drama. It originated in surugaku, and was performed during religious ceremonies. The act is full of singing, dancing and music. However, probably one of the most striking features of Noh theatre are the masks (能面 noh men) they use. Not all the characters in the story will be wearing this special mask. That honour is usually reserved for the main actor only, also called the shite 仕手 in Japanese. There are two reasons why I say this mask is special. Firstly, and what I believe to be simply the most amazing aspect, is how the exact same mask, can express different emotions. It is carved in such a way that with a tilt of the actor’s head and the right light a shadow work, the expression changes completely. There are two main movements an actor can use: kumoru 曇る – tilting downwards – this will produce a frown, an impression of sadness. Sometimes it may even seem as if the mask is crying. The other movement is teru 照る – titling upwards – this on the other hand produces a smile, a more jolly expression. So it is of upmost importance that the actor be in complete control of their body and movements. But however good the actor may be, it is my personal opinion, that he is only as good as the mask itself. Which brings me to my second point: the craft, talent and time it takes to produce a noh mask. It is a process that can take anywhere from a couple weeks to a couple months. The mask is carved from a single piece of hinoki (檜) – Japanese cypress. It has to be light since the actor will be wearing it for several hours while performing. The mask artist will cut the wood, hollow out the back and roughly chisel out the features into the desired shape. He will then add more details using finer chisels. Once that is complete, the entire surface of the mask is sanded down to create a smooth surface. The back of the mask will be lacquered, while the front will be coated with several layers of gofun (胡粉) -Japanese white wash – as a base. Finally skin color is applied, and the artist completes the mask by painting details of the eyes, and hair, strand by strand. As I mentioned earlier, the one mask can express several emotions. So it is with this thought in mind that they are created with a neutral expression, but at the same time with the potential for a variety of emotions. There isn’t just one kind of Noh Mask

There are five main types of masks: men, women, the elderly, Gods and demons. The male mask is called otoko men. Even within this category, you get a whole array of masks representing different men. Similarly, the onna men, female mask, which is probably the most recognisable noh mask, and the most varied, is characterised by differences in age, character and social background. For example you have the fukai, which is used to play graceful and elegant mature women, as opposed to the omi onna , which represents a young working class lady. You also have the deigan, a mask with gold rimmed eyes that suggest that this woman is not even human. The oldest type of mask is the okina, the old man mask. There are also demon masks called kishin. Although, even the Gods may fall under this category, as well as other creatures and goblins. All in all it said that there are about eighty different types of masks! 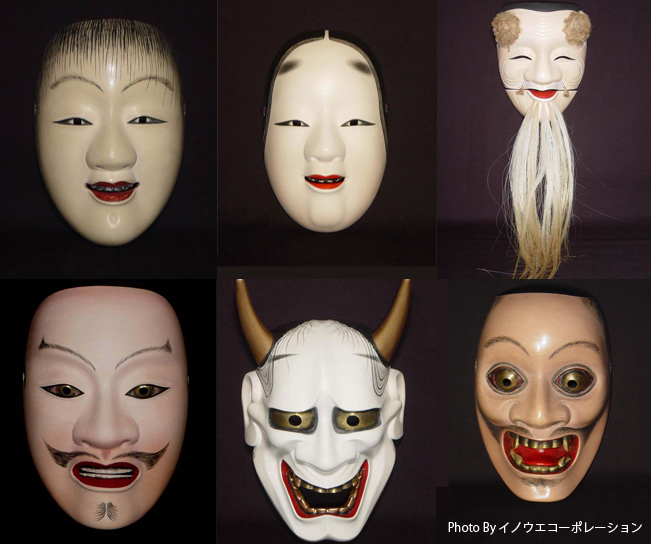 If you have an interest in seeing these masks, of course you can find them in use during a noh play, usually performed in shrines and temples. It is also possible to see them displayed in a museum. However, the rarest and most valuable ones are tucked away in the private collections of Noh Schools. Now, wouldn’t you say that’s another reason these masks are so special?