An aspect of Japanese culture that you might not see often outside of Japan is that of theatre. In fact if you ask most people about Japanese theatre they might mention Noh theatre or Kabuki theatre, but it is unlikely they have actually seen a show. In truth the Japanese theatrical scene is very rich, with thousands of performances every year which cover the whole spectrum of theatre including musicals and modern theatre.

Unfortunately, theatre groups rarely tour abroad, at least without a well known director attached, and for foreign audiences there is perhaps little appetite for modern Japanese theatre featuring actors who aren’t known abroad and using a language that requires subtitles for most people to understand. Kentaro Kobayashi makes an interesting contrast to this, as his performance doesn’t need dialogue and uses very little Japanese. He is a well known comedian in Japan, talented in acting as a mime, and able to direct, draw manga and write scripts.

Seven years ago he could be seen on the internet in a series of videos called ‘The Japanese Traditions’ with one particular video on sushi being very popular. In this video all of the aspects of eating in a sushi restaurant are re-interpreted in a comedic way as a teaching video for foreigners.

In Japan he is a big attraction for theatre-goers with tickets being highly sought after, his unique shows include mime, videos, music, and more. In 2012 he toured France with his show Mr Potsunen. It was well received and was even covered by an NHK documentary ‘The Art of Humor.’

His Potsunen series of theatre shows date back to 2005, and have been released on DVD, however it is only in recent years that we have started to see him abroad and it is unfortunate that these shows have been limited. This is no barrier for those living in Japan, but it is a shame that it is hard for people living abroad to really understand the strength and breadth of Japanese theatre.

Potsunen refers to the name of a character that Kentaro has created, Mr Potsunen, and in his solo shows the audiences enter the unusual world and experiences of Mr Potsunen.

A typical performance includes a lot of mime in order to compensate for a lack of props, it is intensive work for a mime artist, but Kentaro has mastered this art form and incorporated it into his show. Along with videos on a projection screen and music, and a fairly large dose of humour, even people who don’t know any Japanese can enjoy Mr Potsunen’s adventures.

In 2015 Kentaro is once again touring France but this time he has had his first show in London, UK. Over two nights he wowed British audiences with a new Potsunen story at the Leicester Square Theatre (http://www.leicestersquaretheatre.com/).

An interesting aspect of his performances is the use of finger walking to represent travelling, or in the case of his recent British show also swimming! It is hard to describe his unique finger walking, but you can see a video below.

So, for people abroad how do we categorize Kentaro Kobayashi’s shows? It is certainly not traditional like Kabuki, Noh or Bunraku, although in his current tour abroad he has a stage hand dressed in black assisting just like a Kuroko (黒子) from a Kabuki play. This Kuroko completed his tasks just as if he was in a Kabuki play, moving props, but also playing the parts of a delivery man, and also even pretending to be a camera! A second part that Kentaro portrays in his recent Potsunen shows is a strange mysterious old man, wearing a Noh mask of an old man.

However, this certainly doesn’t make his show a Noh play, in fact when Kentaro wears the Noh mask he exaggerates his acting, which can be considered the opposite of Noh acting. The old man mask usually represents the disguise of a god or fallen hero, it is mysterious, and in Potsunen it is certainly a mysterious character, but it is also mischievous.

Later theatrical forms such as Shinpa or Shingeki can also be ruled out, as this show doesn’t sit within these categories either. His show can only be seen as a modern performance that makes use of various theatrical mediums, comedy and the unique talent of Kentaro Kobayashi.

So, next time you are in Japan why not try taking in a theatre show? Or if you are abroad and see a advertisment for a Japanese artist performing at a theatre near you, why not try it out? You might discover something new! 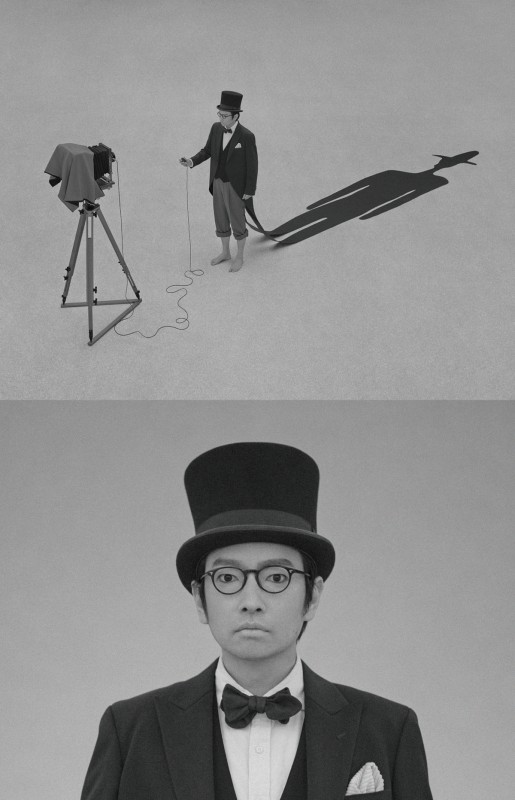