Kyoto can be said to be one of the best centres of Japanese traditions, crafts and Japanese history. Located in the centre of Japan it was the Imperial capital for a thousand years. Today it is home to thousands of religious places including temples and shrines, as well as historical monuments, and the Kyoto Museum of Traditional Crafts!

Inside the museum you can see 74 kinds of traditional handicrafts displayed by which the essence of Kyoto’s traditional industries is shown to visitors. Besides just showing these crafts panels and videos are used to provide detail about the manufacturing processes and techniques of traditional handicrafts.  The museum includes a gallery which regularly holds new exhibitions which can feature fine arts, a library with a collection of books and videos on traditional Japanese crafts and an event room that exhibits the work of young craftspeople and also demonstrations.

Kyoto continues to be fundamental in developing Japan’s traditional culture and partly for this reason it has become very popular for tourists to visit. Aspects of Japanese tradition which are most famous around the world, such as tea ceremony and flower arrangement, developed in Kyoto and even today it is popular to experience these traditions in this amazing city. Traditional industries in Kyoto are part and parcel of Japanese culture and lifestyle, something which is not always remembered, but which many are fighting to remind many people of.  The beautiful crafts at Kyoto Museum of Traditional Crafts are the result of a long history of expertise and professionalism amongst the craftspeople of Kyoto.

In addition the museum regularly holds special events, for example they currently have a traditional dance performance by Maiko (women training to be Geisha) every Sunday which includes a lecture about a Maiko’s kimono and accessories. 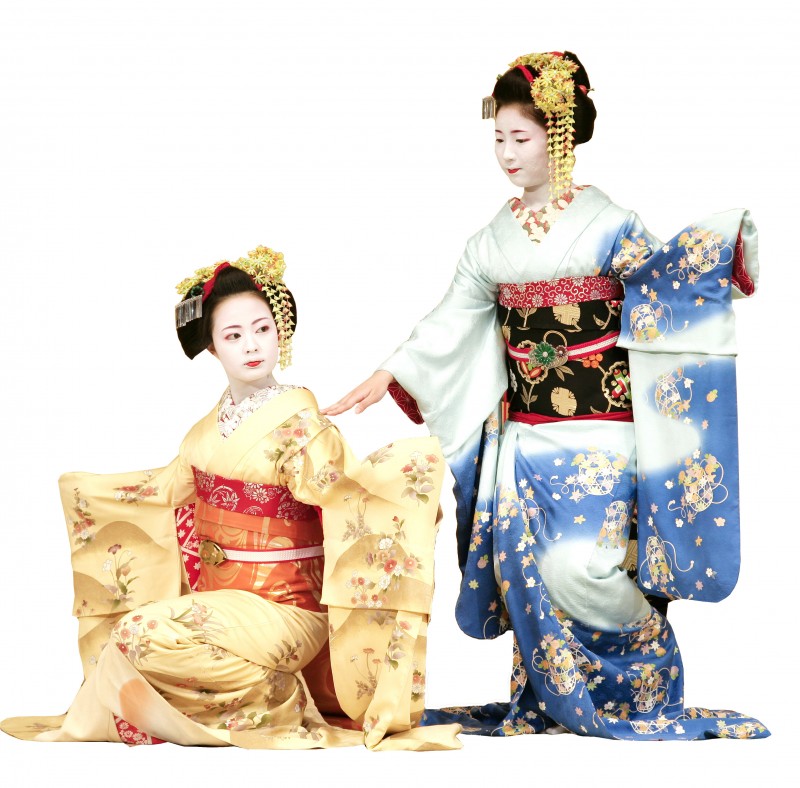 Kyo-yaki and Kiyomizu-yaki are the general terms used for all ceramics made in Kyoto. The ceramic industry in Kyoto began in the 5th century, and developed during the Azuchi-Momoyama Period (1573-1603), and many kilns for making ceramics were built here during the Edo Period (1603-1868). During the Edo Period, Ninsei Nonomura developed the technique of colorful painting on ceramics, and after that, many talented potters such as Kenzan Ogata, Eisen Okuda, and Mokubei Aoki developed unique designs using various techniques. Kyo-yaki / Kiyomizu-yaki has two styles: “tsuchi-mono”, earthenware, and “ishi-mono”, porcelain. They are traditionally used as tableware, ornaments, and utensils for the Japanese tea ceremony and flower arrangement.

Dolls have been used as toys and as charms against evil for long time in Japan. Kyoto-style dolls originated in hina dolls which were toys for the children of nobility during the Heian Period (794-1192). Today, hina dolls are customarily displayed on the Girls’ Festival (3 March). In addition to hina dolls, a great variety of dolls are produced in Kyoto, such as gogatsu dolls displayed on the Boys’ Festival (5 May), ichimatsu dolls which can sit down and whose costumes can be changed, gosyo dolls modeled on pretty children and fuhzoku dolls which are adorned in historical costumes. The production process of Kyoto-style dolls is divided into several parts, such as heads, hair, hands and feet, accessories, and costume.

Nishijin-ori woven textiles are most well known for their use in the making of kimono, as such it is no surprise that the weaving industry has a long history and dates back to between the 5th and 6th centuries. Once Kyoto became the capital during the Heian Period it was given a boost by government factories. The name Nishijin came from the Nishijin district in Kyoto, where many weavers established their workshops after the end of Onin War (1467–1477). The richly decorative brocades were used for clothing for the Imperial Court and Buddhist and Shinto priests. Based on the design sketch, the dyed silk yarn is woven to produce the textiles which have elaborate patterns. Nishijin-ori has a wide variety of styles, such as gold brocade, damask, figured satin, and velvet. Today, it is said that there are no textiles that Nishijin weavers cannot weave.

Kyo-Yuzen is one of Japan’s best known dyeing techniques. Yuzen dyed fabric is used for kimono and obi sashes. Its motifs feature themes such as seasonal birds, trees, and flowers, using designs similar in style to those in traditional Japanese painting. The beauty of nature is expressed on white fabric. Kyo-Yuzen has two dyeing styles: Tegaki-Yuzen, hand-painting, and Kata-Yuzen, stencil-dyeing. Hand-painting techniques were originally developed by Yuzensai Miyazaki in Kyoto in the middle of 17th century, therefore, the artform came to be called Yuzen. After that, stencil-dyeing techniques were developed by Jisuke Hirose in Kyoto in 19th century. 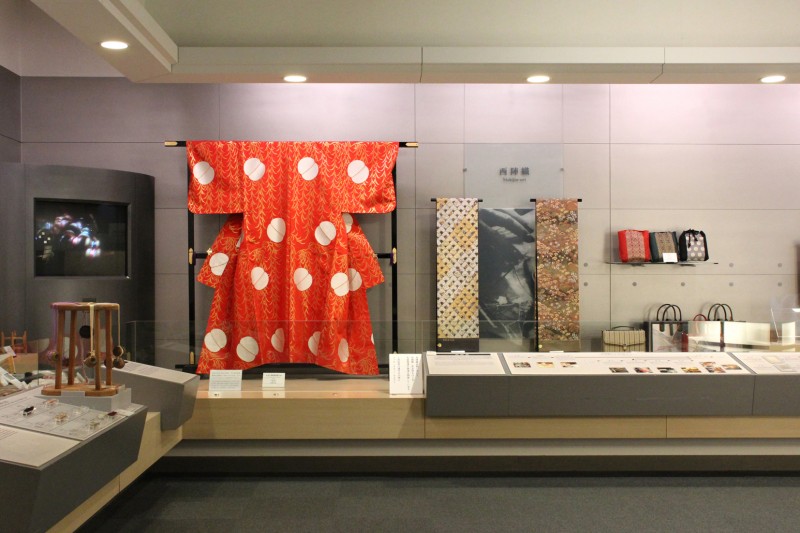 Kyoto has been the home of Buddhism in Japan since the Heian Period (794-1192). Buddhist family altars were first produced here about 1100 years ago. They also began to appear in the homes of ordinary people throughout the country after the Edo shogunate banished Christianity and promoted Buddhist temples in the 17th century. Subsequently, Kyoto has been renowned for producing the highest quality Buddhist family altars. The crafting of them has been an integrated process involving a division of labor among eight different types of craftsmanship, including woodworking, sculpting, lacquering, gilding, and metalworking.

Lacquerware is a Japanese handicraft form that has long fascinated the world, in fact, “japan” is another name for lacquerware. Lacquering in Japan began around 9,000 years ago, making it the world’s oldest handicraft. Crafts utilizing lacquerware include maki-e, in which gold and silver powder is applied to lacquered objects; chin-kin, where incisions are made on a lacquer surface and gold leaf is inlaid to create exquisite patterns; and raden, in which mother-of-pearl is inlaid on the surface of the lacquer. Lacquerware became popular with the boom of Japanese tea ceremony during the 16th and 17th centuries. Lacquerware is used as tableware, furniture, and utencils for the tea ceremony.

A big thank you to the Kyoto Museum of Traditional Crafts for their help with this article! 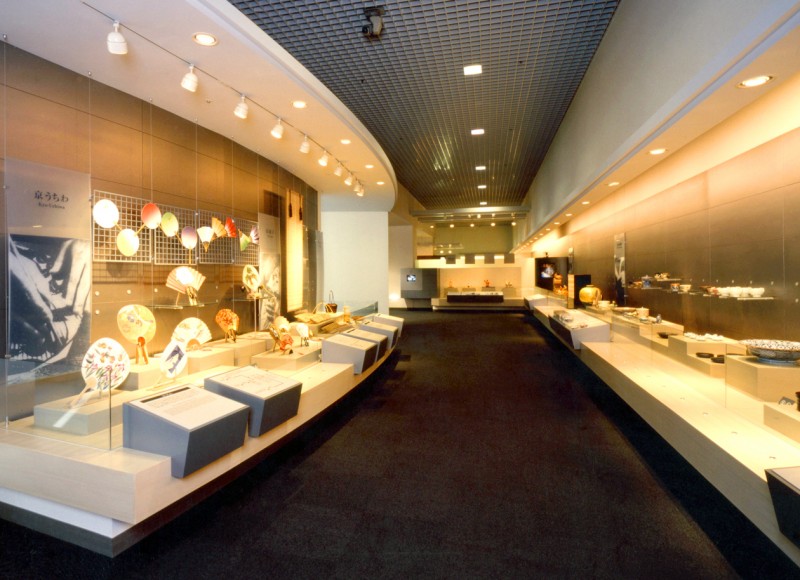