On the 11th of February 2015 at the Daiwa Foundation in London visitors had the opportunity to hear from three speakers about Japanese culture and crafts, more specifically tea and ink-stones (硯箱). Timothy d’Offay’s Postcard Teas specialises in tea, and he has superb knowledge of numerous small tea farms in Japan. Wazuka tea dates back to the Kamakura period, however as 75% of the land in this region is mountainous the tea fields themselves are on steep slopes and can only be farmed by hand. Teruo Kurosaki is a designer who now focuses on revitalising traditional crafts, including the rebirth of Ogatsu inkstones.

On the subject of tea, which of course Japan is famous for, Timothy had a lot of interesting and surprising insights. In fact in recent years tea farmers have been badly hit by a number of factors, such as the spread of ready made tea – which are found in vending machines everywhere – that has little focus on quality and the inevitable migration of young people from villages to cities. Timothy pointed out how most tea farmers are now in their 70s, a statistic which is quite common for not just tea but also for many craftmakers.

From clearly a lot of experience, and a lot of knowledge he had many great suggestions for helping to revive the fortunes of tea farmers and pointed out initiatives by some farmers to have their own blogs, to invite people to help with the harvest, and more interestingly one that has a shop selling tea side by side with a restaurant on a mountainside which has become famous for its hand made soba.

The other main speaker of the night, Teruo Kurosaki, introduced us to the craft of Ogatsu ink-stones. Before the tsunami in 2011 90% of inkstones came from Ogatsu in Miyagi Prefecture where over 200 people worked in the workshops there. From the stone quarried in Ogatsu a small fraction would be selected for ink-stones, neither being too hard or too soft they were the perfect material for crafting an ink-stone. Until 2011 the region had benefited from 600 years of continuous production. 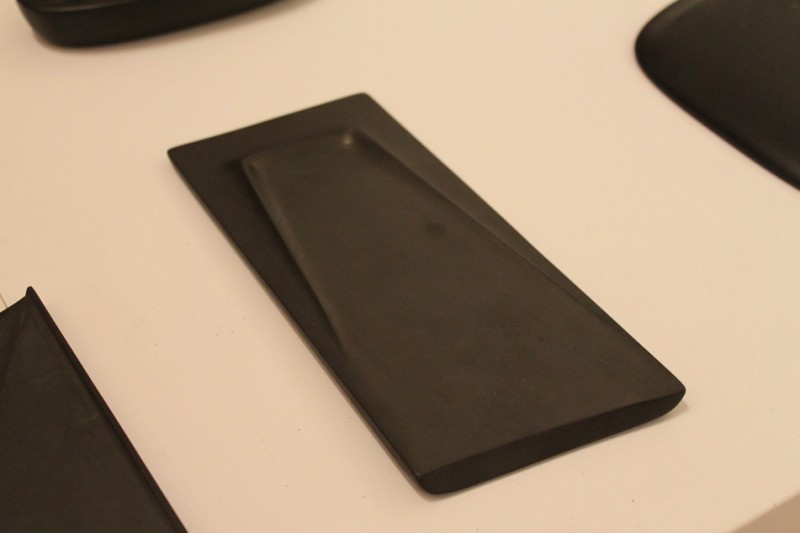 In the tsunami all of the workshops were washed away and the 600 year old industry was brought to its knees. Currently only one stoneworker remains, with no apprentice, and where there were once hundreds of people, today there are only four who still work on ink-stones. 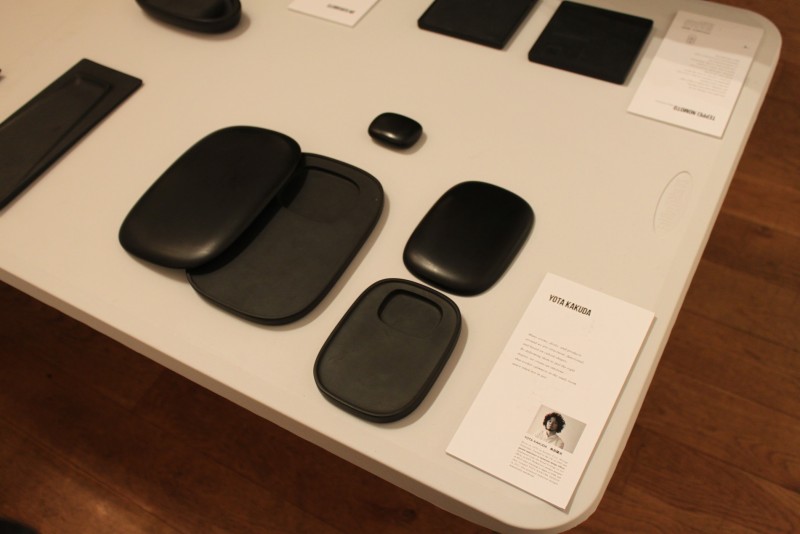 Teruo Kurosaki’s project, to breathe new life into this Ogatsu craft has benefited from the Ministry of Economy, Trade and Industry and a Subsidy to Support Measures to Revitalize Traditional Craft Industries. Working together with calligraphers and sculptors a new culture in ink-stone design and calligraphy culture is being created. Last year Ogatsu ink-stones which have been given a new concept were exhibited across Japan and we were lucky enough to have a look at them. 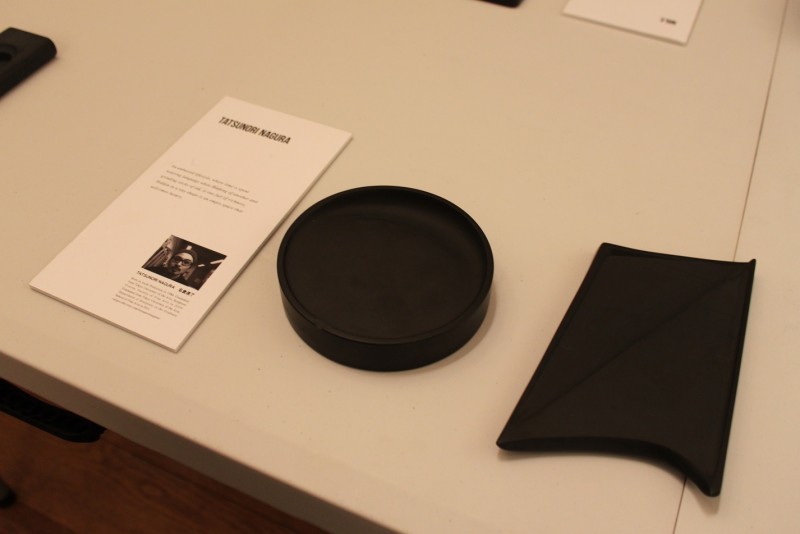 After the seminar we were invited to look for ourselves at the newly designed ink-stones as well as try Wazuka tea. In addition a calligrapher was present to write for us anything that we desired. Although young at 24 she was extremely talented and almost swayed from side to side as she drew the kanji characters. 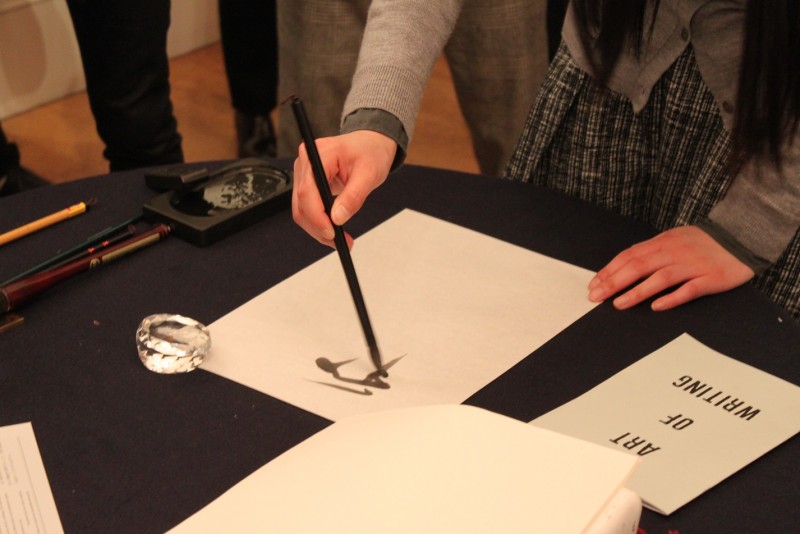 Timothy d’Offay has tea travelled extensively across Asia especially Japan. His shop Postcard Teas supplies many of London’s top restaurants, hotels and coffee shops. He is co-author of The World Atlas of Tea, which is to be published in English and French editions in 2016. In 2009 Softbank published a bestselling book on tea brewing in Japanese by d’Offay:Kyūkyoku no kōcha o ireru tame ni [English: How to Brew the Perfect Cup of Tea].

Teruo Kurosaki is founder of Idée, the Tokyo furniture and interior company that allowed designers such as Marc Newson to develop their careers. Kurosaki turned away from the design sector in 2002 focusing his attention on the support of traditional Japanese craft and culture and its endorsement by a young society. He is editor of Norah, a quarterly Japanese periodical promoting organic and sustainable values.

Timothy Toomey is a professional carpenter and joiner, having later studied furniture and industrial design at art college in London, he went on to work in Italy and eventually Japan, where he became one of the first foreign designers to work successfully and anonymously for MUJI. In 2009 he co-ordinated the construction of the Japanese tea house at the Ashmolean Museum in Oxford. Toomey also helped to realise the UK Kintsugi Project. 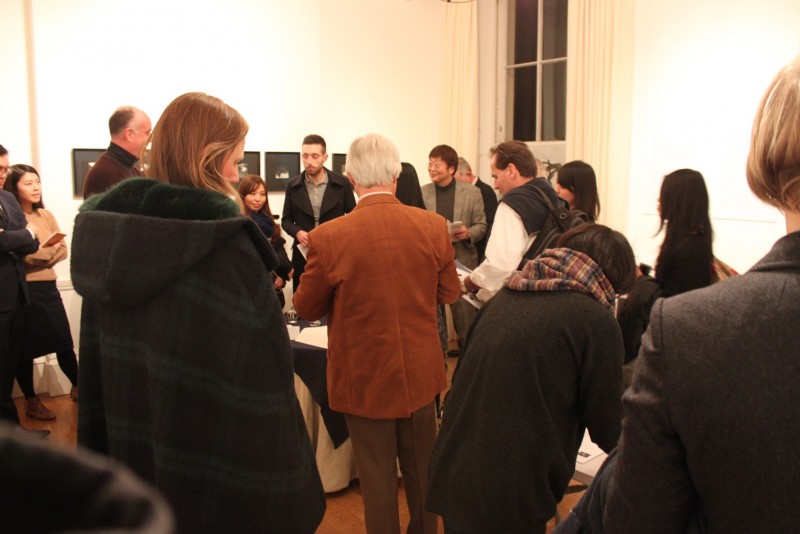 Introduction to the Daiwa Anglo-Japanese Foundation

The Daiwa Anglo-Japanese Foundation is a UK charity, established in 1988 with a generous benefaction from Daiwa Securities Co Ltd. The Foundation’s purpose is to support closer links between Britain and Japan.

It does this by:

– making grants available to individuals, institutions and organisations to promote links between the UK and Japan across all fields of activity

Daiwa Foundation Japan House, the London-based headquarters, acts as a centre for UK-Japan relations in Britain by offering a wide programme of lectures, seminars, book launches, courses and exhibitions as well as meeting rooms for Japan-related activities and facilities for visiting academics.

The Foundation is represented in Japan by its Tokyo Office, which provides local assistance to Daiwa Scholars and administers grant applications from Japan. It also handles general enquiries and forms part of the network of organisations supporting links between the UK and Japan.