Interview and photos by Mike Sullivan

Please introduce yourself and your background. Where are you originally from in Japan?

I am a classical violinist based in London. I have been performing mainly as a soloist and chamber musician in Europe and Japan, and I recently released my first solo album. I also enjoy giving educational workshops, and teaching.

I am originally from Kawasaki, but I have lived outside of Japan for most of my life. When I was 3, my family and I moved to Hong Kong. My earliest memory starts from the moment I got on the plane leaving Japan – so it’s a pity that I don’t have any childhood memories of living in my ‘hometown’! After Hong Kong, we moved to Switzerland, then to London. My parents moved back to Japan when I was 15, and I had a choice of going back then, but I had a strong wish to study in London. I’ve stayed in London ever since, and graduated from Royal Academy of Music in 2012.

Could you tell us about your debut album with Simon Callaghan, Colours of the Heart?

‘Colours of the Heart’ was released in Spring 2014 on MusiKaleido Records. It was recorded with Steinway pianist Simon Callaghan, who I have been performing with since 2012. It was a great privilege for me to record with him, and also to work with an amazing production team, including producer Jeremy Hayes.

From ‘Colours of the Heart’: Ich Liebe Dich by Grieg

How was this connected to Delius and Gauguin?

The album was based on my project I founded in 2012, called Delius and Gauguin, exploring the significant exchanges between English composer Frederick Delius, and French painter Paul Gauguin. Before starting this project I didn’t know anything about Delius, until I saw Gauguin’s renowned painting, Nevermore at the Courtauld Gallery in London. I was immediately drawn into the painting by its mysterious, melancholic colours, and somehow was curious to find out more about this painting. Later on, I found out that the painting was first owned by Delius. The first piece I heard by Delius was his Sonata for Violin and Piano No.3. I was struck by the melody and harmony, which were mysteriously colourful, as if painting Gauguin’s colours.

To my surprise, there were significant exchanges between Delius and Gauguin, and centered around them there were artists such as Edvard Munch, Ravel, Debussy and Grieg. Based on my research, I wanted to recapture the web of inspiration shared between these artists, through a programme of their works. ‘Colours of the Heart’ includes Sonatas for violin and piano by Delius, Debussy, Ravel, and a premiere recording of Grieg’s Lieder, arranged for violin and piano by Sauret.

You can find out more about Midori’s album on her website: 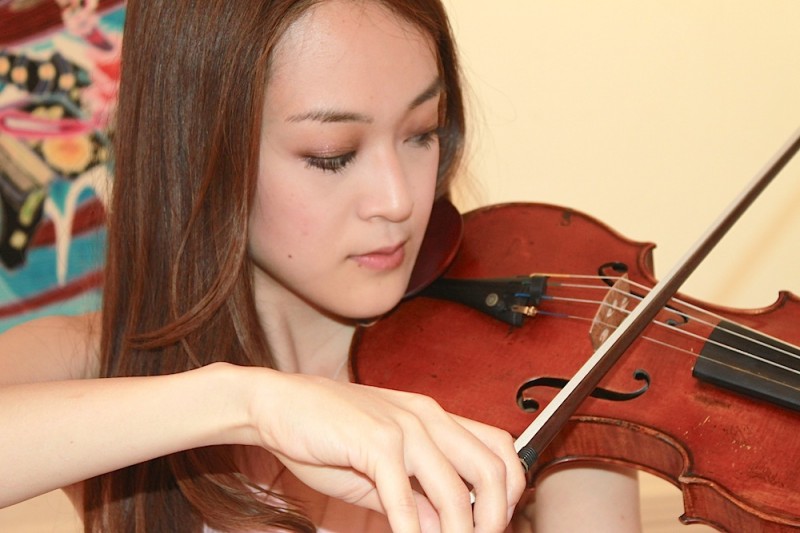 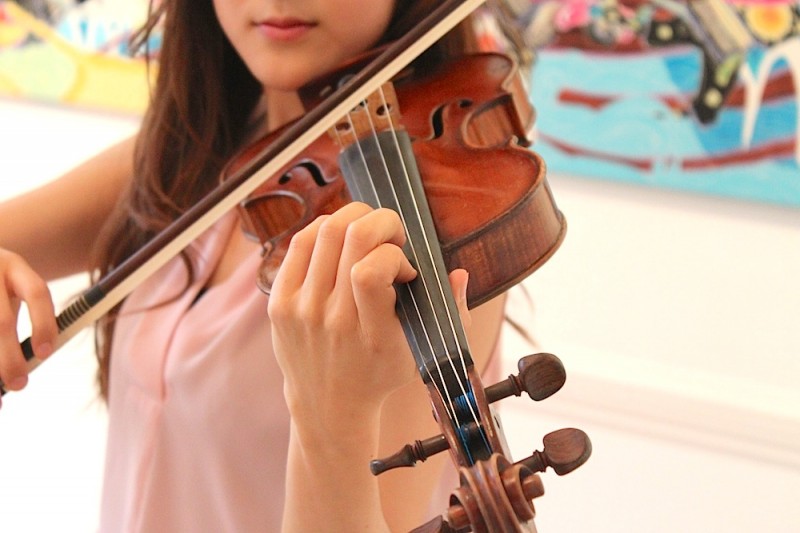 How well has this album been received?

It has been very exciting to receive responses from around the world, and to read enthusiastic reviews. During the week of the CD release, Simon and I were broadcast live on BBC Radio 3 to introduce our album, and we performed Delius and Ravel Sonatas. Shortly afterwards I was thrilled to receive messages from people around the world who had been listening to our performance and recording, to say they did not know much about Delius before, but really enjoyed the music. One of the aims of releasing this album, was to introduce the music of Delius to a wider audience, so I was very pleased to hear this from the listeners.

If you were to make another CD of your solo performances, what would be your dream music to record next?

I would love to record more works for violin and piano by British composers, because there are so many great pieces that haven’t performed often, but deserve to have more recognition. Delius Violin Sonata No.2 is another beautiful work, which I would love to record. Actually, I do have another CD project coming up in the future, but it’s a bit of a secret for now!

From ‘Colours of the Heart’: Sonata for Violin and Piano No.3 by Delius

To what extent do you feel that your performances are influenced by your own Japanese background?

Whenever I perform a piece by a Japanese composer, I feel that my Japanese identity emerges through. In a way, this is the only time I ever feel my Japanese background influencing my interpretation. There is something about the spirit of Japanese music, perhaps what Takemitsu referred to as ‘ma’ (space of time), which one has to feel naturally when playing these works on Western classical instruments. I’ve lived outside of Japan for most of my life, but actually the further and longer I am away from ‘home’, the more I feel the importance to stick to my Japanese identity. In 2011, I founded a project called Music of Britain and Japan – A Cultural Exchange, which explored the influences in music from cultural exchanges between these countries since 1885. Since then I have been performing more works by Japanese composers, and I hope to develop further collaborations with them in the future.

Do you think for Japanese people it is challenging to work internationally as a musician?

Yes, it might be challenging if a Japanese musician has difficulty communicating in English. Even though music is a universal language, I feel that for any artist, the process of exchanging ideas with other artists, composers and audience is so important. Other than this, I think it is equally challenging for any musician to be working internationally. 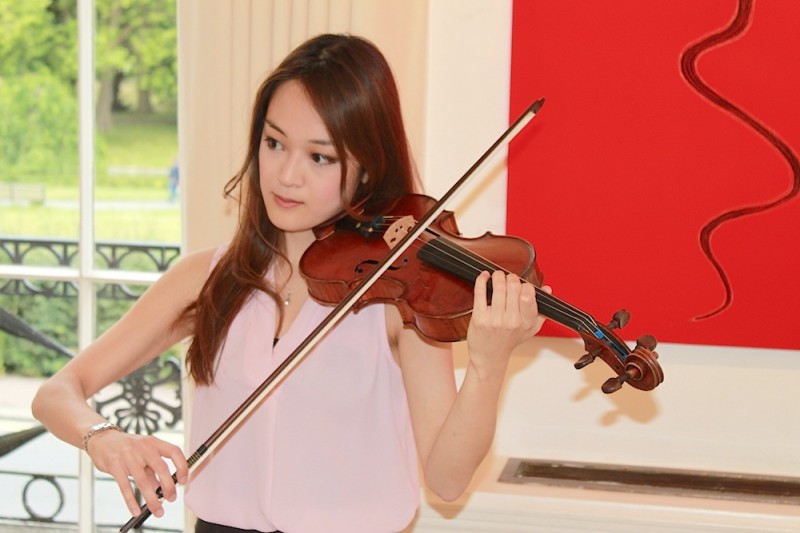 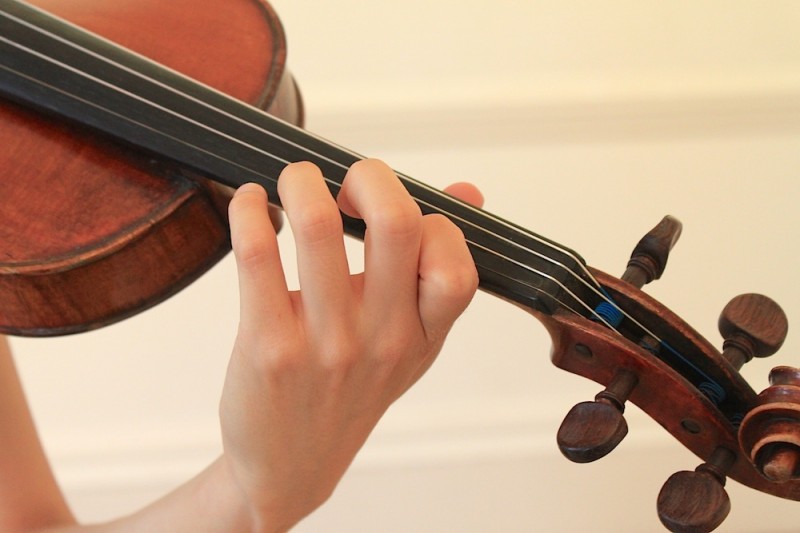 I go back to Japan once or twice a year for concerts. I have continuously worked with Japanese musicians in the UK. When I was a student at the Royal Academy of Music, there were quite a few Japanese musicians studying there, so they became great colleagues as well as close friends!

What concerts do you have coming up?

I had a concert in Broadstairs three days ago on the 12th July, with my chamber music ensemble. It was an exciting programme of chamber music with harp. Then I have some concerts in London in August, as a guest violinist for a project called VISUALISE!, and in the Autumn I will be working with pianist Ian Brown for our recital in October at Royal Over-Seas League.

From ‘Colours of the Heart’: Sonata for Violin and Piano by Debussy

Could you tell us a bit more about your violin? Its very beautiful.

I play on a Modern Italian violin, made in 1920. Even though it is nearly 100 years old, it is still considered ‘Modern’ in the history of Italian violin making, which dates all the way back to the 16th Century. These string instruments are precious not only because of their antique value, but also because they develop their mature sound through time, and by being played. The violin is like a living voice – each instrument has its own ‘personality’, so encountering the right instrument, and developing a good partnership with it is crucial for violinists.

How often do you go back to Japan? What is your favourite thing about Japan?

I go back to Japan about twice a year. My favourite thing about Japan is Onsen (hot spring baths). Last time, I visited Lake Kawaguchi, a hot spring resort, where one can enjoy the most stunning view of the Mount Fuji. One of the best thing about going to an Onsen for a holiday is that you stay in a Ryokan (traditional Japanese hotel) where they serve delicious Japanese course meals, often brought to your room, and you feel absolutely pampered with all this service, after relaxing in the hot springs! You can’t get this anywhere else in the world! 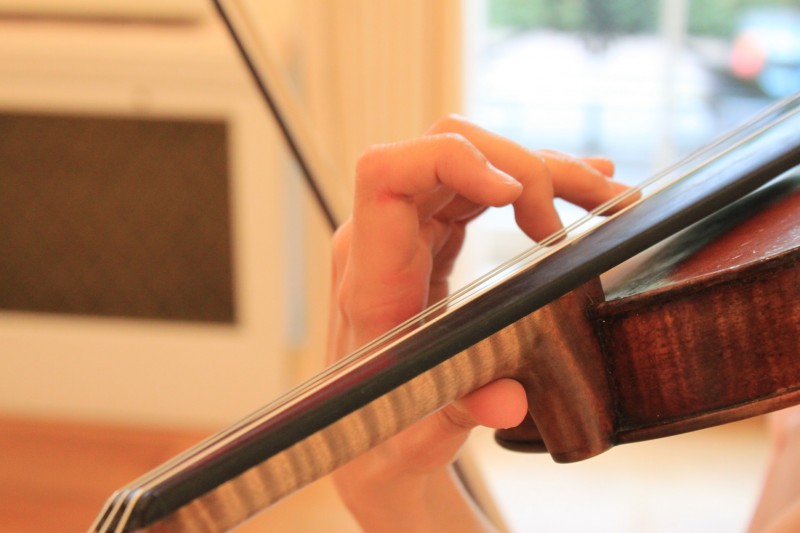 What do traditional Japanese crafts mean to you? What is your favourite craft?

Even though I grew up moving around to different countries, there were some Japanese crafts which my family always kept with us, wherever we went. So for me, Japanese crafts are memorabilia of home. Japanese crafts are very practically designed, and beautiful. For example, I still use furoshiki (wrapping cloth) whenever I travel for concerts, to organise my clothes! They come in various designs, but I’ve always used the same furoshiki that I’ve been using since my childhood, one with a crane print.

If you could learn to make anything, i.e. crafts, what would you love to do?

I would love to learn how to make Japanese pottery. Japanese food is always served with artistic presentation, and I think the dishes enhance our appreciation too. I would also love to make tea ceramics, as I am a great fan of matcha and drink a lot of tea everyday!

Finally, any last words for anyone interested in Japanese culture?

I would encourage everyone to visit Japan, as there is such an interesting contrast of the traditional and modern culture. I hope that through mutual interests of any aspect of Japanese culture, there will be more exchanges between Japanese and foreign people.

Thank you to the Daiwa Foundation for letting us use their gallery. Please note that the artwork that can be seen in the background is by Japanese artist Toru Ishii. 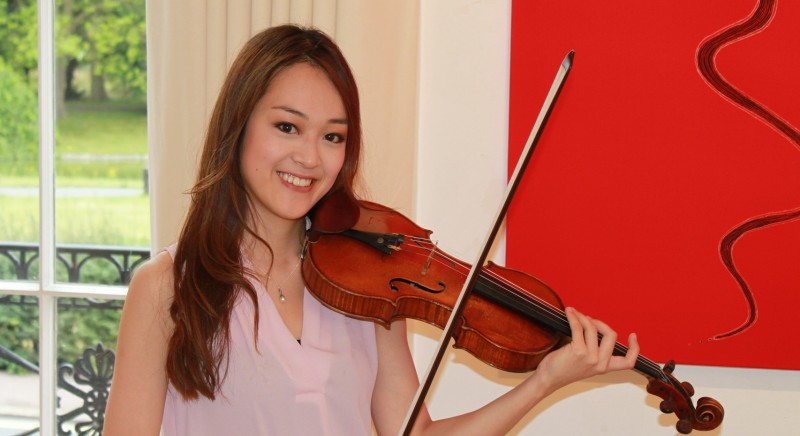