Recently reported in the Japan Times.

In 1962 President John F. Kennedy was given a set of Hina Dolls, now over 50 years later U.S. Ambassador Caroline Kennedy has traced the woman who sent them.

The below story is as reported by Japan Times:

Kennedy appealed for help in finding the sender of the dolls, which she played with as a child and which are on display at the ambassadorial residence in Tokyo in the run-up to the Girls’ Day festival on March 3. The dolls were sent by former grocer Tsuyako Matsumoto, now 92 and living in a nursing home in Kitami, Hokkaido Prefecture. Matsumoto said she was delighted to hear that Kennedy wanted to thank her.

Kennedy began the search knowing some details about the sender, but that wasn’t enough given the amount of time that had passed. In January, the U.S. Consulate General in Sapporo City attempted a search based on records of the period but failed to locate Matsumoto. Then, during a visit to Sapporo on Feb. 4, Kennedy asked the media for help, and the trail quickly led to Matsumoto. In 1962, Matsumoto was running a shop selling groceries and sundry goods in Kitami. One day, she wrote to President Kennedy and in return received a letter from a presidential secretary thanking her for writing.

“I never thought I would get a reply,” Matsumoto said.

The letter was in English, but she asked a doctor she knew at a hospital to translate it. Moved by the letter, she went to a department store in the city and spent money she had earned from knitting and other odd jobs on a full set of 15 hina dolls, including a couple representing an Emperor and Empress.

“I thought it would be a surprise because it was pricey and rare,” she said of the gift. These dolls typically grace the homes of girls celebrating Girls’ Day. Staff at the store helped her to package the dolls and she dispatched the set directly to the White House. Hearing that Ambassador Kennedy had played with the dolls as a child and that they are now on display at her residence, Matsumoto said: “I’m really grateful.” Her voice was full of emotion.

She said she still has the letters she received from the United States. Among them is a coin bearing President Kennedy’s face, which was enclosed in one of the letters. Matsumoto said she would love to meet Ambassador Kennedy one day. Asked by a reporter what she would say, she replied: “That’s a secret.”

So what are Hina Dolls? In June last year we interviewed a 2nd generation Hina Doll maker who explained a bit about Hina Dolls. Akira Mochizuka was a really great interviewee!

Hina doll have a fairly long history, the origin of Hina dolls date back to the Heian era (about 1,000 years ago). Formerly, people believed the dolls could be used as a scapegoat to drive away evil spirits. So they made paper or straw dolls and set them afloat on a boat and down a river to the sea hoping that the dolls would take the bad luck or trouble away from them. They would observe this tradition every 3rd of March. At the same time aristocratic young girls in Kyoto played with dolls and other props which represented the Old Imperial Palace, where were made by paper and other wood, called “Hiina asobi (doll play)”. Gradually these two things mingled together over time so that it became a “Hinamatsuri (Girls day).” Today Hinamatsuri is celebrates girls health and happiness, however this kind of custom started during the Edo period. Before the Edo period the Hinamatsuri was a more serious and more spiritual event.

During the early Edo period in 1629, the Old Imperial Palace held a lavish Hinamatsuri (Doll Festival). From this point the inner palace of Edo Shogunate also started to do hinamatsuri too. Eventually this doll festival spread into towns and from the central city to the countryside. In the mid-Edo period this festival became more common and popular. People in Edo period started to celebrate “Hatsu sekku” for baby daughters. Gradually the types of Hina dolls increased . and many related props for dolls were also created and all of these items became more luxurious. The Edo Shogunate was enshrined in official records for the fact that they issued a proclamation to forbid ostentatious decoration for Hina dolls. 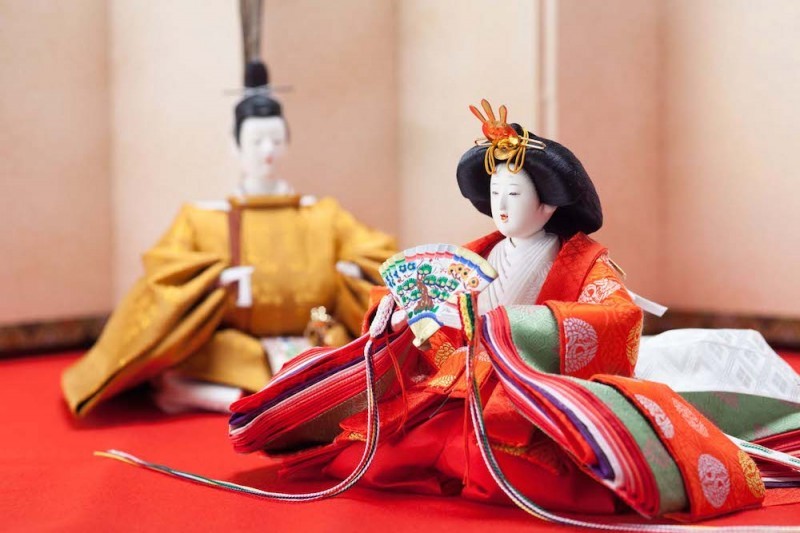